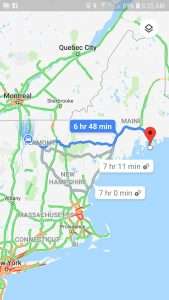 We left Vermont fairly early on Monday as the next leg of the trip took us to Mt. Desert Island….to the Bar Harbor area for an overnight. Another 332  miles and about 7 hours of driving. This was a day of mostly driving and having long conversations about anything and everything, while also hot spotting my phone so that Zach could keep busy on his laptop when we were taking a break from talking. We stopped at a Dollar General in the middle of nowhere so that I could buy the third pack of cheese I’ve bought on this trip, along with the second tub of butter and a second pack of hot dogs. I’m not sure where I left the first pack of cheese and butter, but I have a feeling it’s in Philly. The second pack of cheese and hot dogs got left in Patty’s freezer in Vermont. I had planned to freeze them so they’d stay colder longer in the cooler. Well, they’re colder long, but in Patty’s freezer.

We stopped off a beautiful river next to an old graveyard for lunch and had sandwiches on the rocks along the riverside. We crossed over Thompson Island, which used to belong in my family many decades ago, to go onto Mt. Desert Island and found a wooded campsite at the KOA Woodlands, which was really peaceful, until I backed my car into a tree…..I think the tree took most of the damage and it looks like I’m not the first, nor will I be the last, to put the back of my car into it. 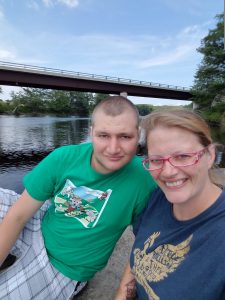 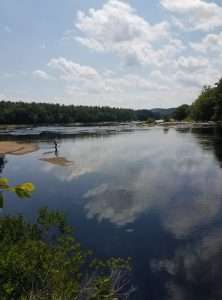 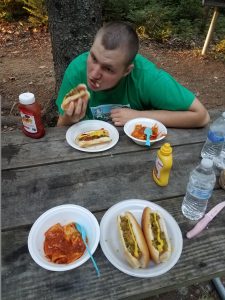 Zach has been carrying crickets in a habitat since Georgia and one cricket in a small jar that he picked up in North Carolina, which he informed me didn’t have wings when he caught it, but had since grown them in. He decided to let them go in Maine and wished them well, while we thought about how they might fare in the Maine winter. We contemplated if they would adapt and find a warmer spot to hibernate during the snowy months and came to the conclusion that the North Carolina cricket will probably do okay since he caught him in the foothills and they get snow in that part of the country. The crickets from the Savannah area will have to figure it out pretty quickly if they want to survive the winter. I wish we could have put homing devices on them so that we could know for sure in the spring if they made it through the winter or not.

Other than that, not a lot happened in Maine….we ate hot dogs and ravioli, which has become a staple on this trip for us when we stay in campgrounds because they’re easy to make.