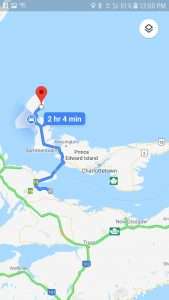 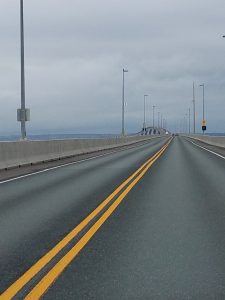 When we left Amherst Shore, Nova Scotia for Prince Edward Island, we put a department store into the GPS because the first thing we needed to do was find another power inverter for the car so that we could have an outlet for regular plugs, specifically the air mattress power cord. The power inverter we brought with us got slammed in the car door and was completely useless, but fortunately it was AFTER I had inflated the air mattress for the night. I made Zach sit on it to deflate it.

We headed towards New Brunswick again and to the Confederation Bridge, which connects New Brunswick and Prince Edward Island by an 8 mile bridge across the Northumberland Strait. This is something I’ve always wanted to go over but never got back to PEI to traverse it. The Strait was foggy and the skies were overcast, but we could see blue skies breaking towards the northwest corner of the island so I was hopeful that we might end up with good weather after all. 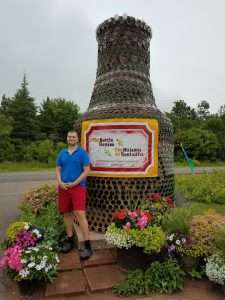 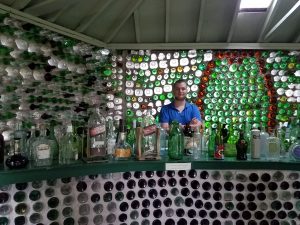 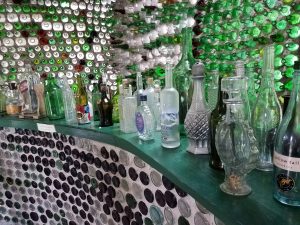 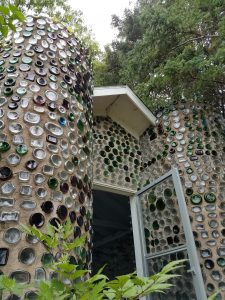 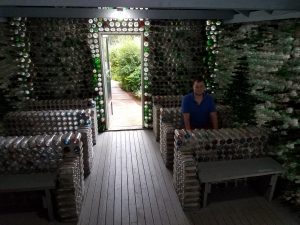 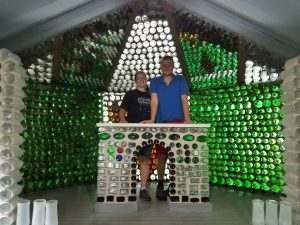 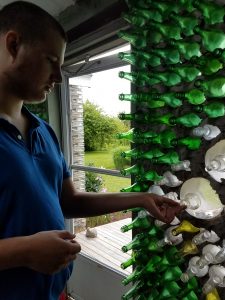 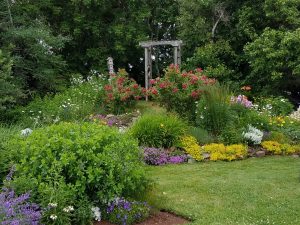 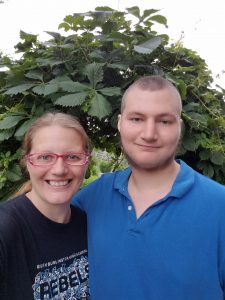 When we got over the bridge, I stopped into the tourist center to pick up a guide book and a couple other cards for area attractions and found one for The Bottle Houses. Instead of heading directly to our campsite, we took a little detour to check this out. It was roughly $15 Canadian for the two of us to tour the grounds. It was incredible and the only thing that would have made it better was if the clouds had parted and the sun was shining bright through all of the bottles. Even without full sun, it was still amazing. The gardens, pond, and fountain were so well kept and you could tell that the man that had created this little oasis was a master gardener. 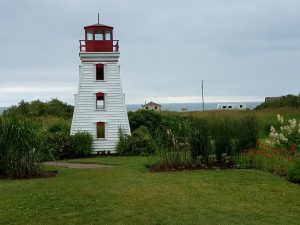 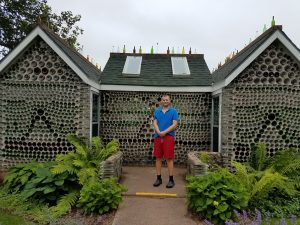 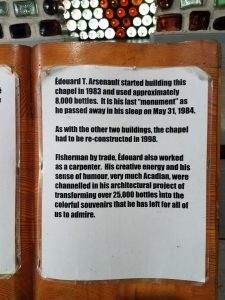 The bottle houses aren’t actually lived in but they do have some great purpose. One is set up as a bar and is made of all kinds of liquor bottles, with tons of empty bottles on the bar itself. Another is a small house that leads out into the yard with a beautiful lighthouse looking out over the ocean. The last is an adorable chapel complete with an altar and pews made out of bottles. This is the building I would have loved most to see lit up with the bottles creating the ceiling over the altar.

All of the bottles faced inward so their necks were inside the houses. Some people had put coins in to the bottles to make wishes. Zach found this intriguing so I explained the concept to him….that it was just like a wishing well or pool of water/fountain, but in this case, the coins were put in the bottles. He made a wish of his own.

There’s also a big bottle made entirely of bottles at the entrance of the parking lot and sculptures around the grounds with bottles as accessories. In a little hut, an artist creates amazing paintings, watercolors, and silk batik scenes of life on Prince Edward Island. If I were independently wealthy and had more space in my car, I would have brought home some of her pieces. There are so many amazing artisans on the island and if you are traveling along any road, you’re sure to find a home studio or craft shop to browse. 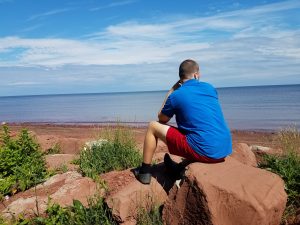 We drove up the western tip of the island (about 125 miles total from Amherst, Nova Scotia) to spend the night at Jaques Cartier Provincial Park and found the most amazing camp site. The beach was literally just feet away from our tent. The view was breathtaking and the temperature was perfect. You couldn’t get any more perfect than that night. Zach walked the beach for a bit and I sat in my camp chair just soaking in the salty breeze and warm air. The night got a bit chilly, but it was so nice to fall asleep with the sound of high tide coming in and then waking up to it going out.