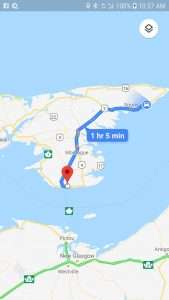 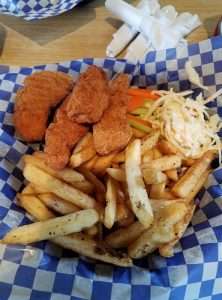 Another 52 miles to the bottom southeastern corner of the island. This was our last full day on the island. We drove to the visitor center just before our campground and the ferry and had a nice lunch of chicken fingers and some fresh coleslaw and veggie sticks. After having sandwiches for lunch for days on end, it was nice to have someone else make lunch for us, but also to eat some fresh food.

We then headed to the Northumberland Provincial Park to set up camp for the night. The weather pattern was strange when we first arrived. It spritzed here and there as we set up the tent and I thought for sure that we would end up getting rain, but the woman at the ranger station assured us that other than a few sprinkles, they weren’t going to get anything for a while, which was one of the reasons for the fire ban at all parks on the island. 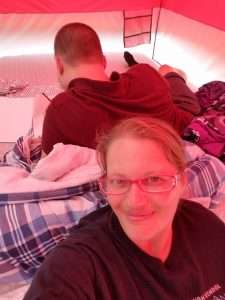 Zach had a bit of a rough day and needed some downtime and asked to hang out in the tent for a while, so I took out a pad of paper and a pack of colored pencils that I had been holding onto since I stopped at Target in Pennsylvania for a moment just like this. He spent about an hour and a half in the tent drawing pictures, giggling and singing. It was nice to see him relax for a bit and just calm down after a couple anxious days. Considering that we’ve been on the road for over two weeks, he’s done surprisingly well being out of his comfort zone and his routine.

A little later, we took a walk down to the beach and walked to the cliffs, where we could go no farther. We picked out a couple of “vacation rocks” to take home with us. When my kids were in Nova Scotia many years ago for two summers in a row, we picked out vacation rocks to take home and they’ve traveled with us to three different houses and now reside outside my door in Georgia. These stones we picked out this time are a little smaller so they’ll most likely go on our curio shelf in the living room. We picked them for the red and blue coloring that is peculiar to PEI stones. 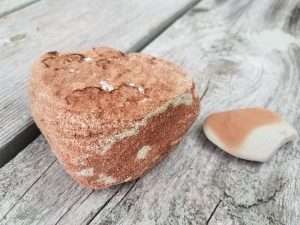 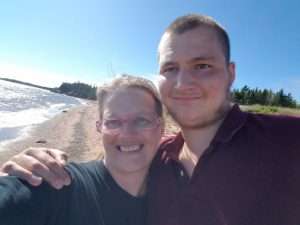 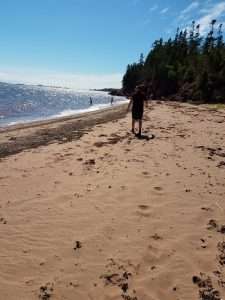 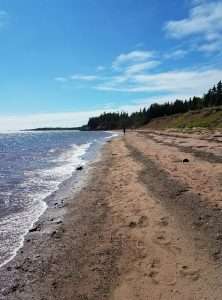 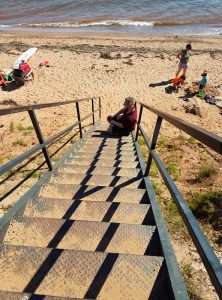 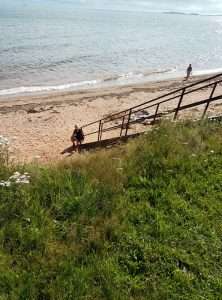 I thought we were done with our walk until I saw Zach sitting at the bottom of the steep stairs that go from the beach to the campground on the cliff above. I asked what he was doing and he said, “I’m pretending that I’m in a plane that’s taking off as steep as these stairs.” He spent the next half hour inspecting the stairs from every angle, from down on the beach, partway up the stairs, and from the cliff above, using his imagination the entire time to pretend that he was on a plane. I often wonder what goes on in that brilliant mind of his, so I’m intrigued when he shares some of it with me now and then.

After dinner, we both showered and then laid down for the night. We fell asleep pretty quickly as we’ve both been tired. Road tripping can really take it out of you after a while. Around 1 am, though, we were woken from a dead sleep to an unearthly sounding scream. At first, I thought a woman was getting attacked and was ready to jump out of the tent and come to her rescue, but then I noticed a pattern. The screams were every couple of seconds apart. They were right outside our tent and so incredibly loud and horrifying. I next thought it was a young girl going throughout the campground pulling a prank and was ready to yell out of my tent to stop. But that’s when I realized the sound wasn’t human and then I just told Zach not to move or make a sound. It started to move away from the tent and make its way through the campground, continuing the pattern. We could hear the sound moving away, but could still hear it off in the distance for quite a while. It took a while to fall back to sleep. In the morning, I looked it up online and found that it was the scream of a fisher cat.  I have never heard anything like it and never want to again. This was the first time I’ve felt unsafe with just a tent between me and the great outdoors. I’m hoping that we don’t have to hear this again on this trip. 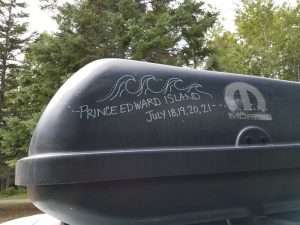 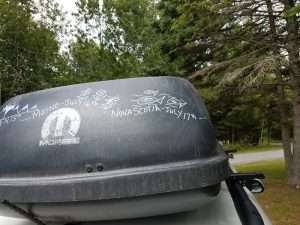 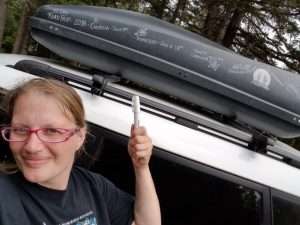 When we were in PA, I picked up a white Sharpie marker, thinking I would like to decorate the car carrier with some sort of itinerary from our trip. I took it out while Zach was coloring and decided to do some of my own. I’m adding the places and dates that we’ve visited along the way to commemorate our trip. Next year, I hope to do the same on the road trip that my daughter and I would like to do together.