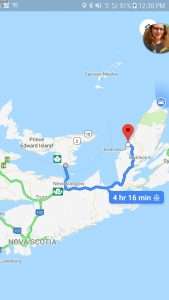 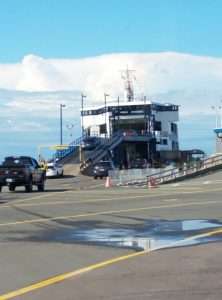 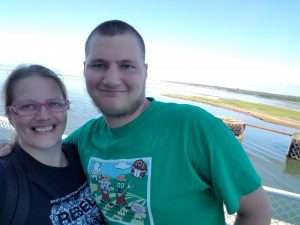 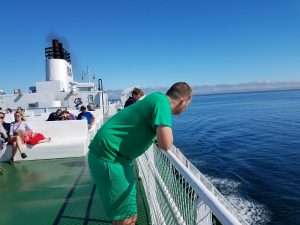 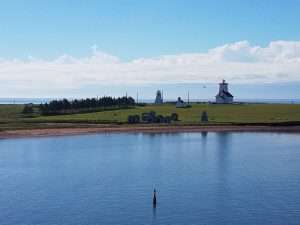 We packed up fairly early as Zach was in a hurry to get to Nova Scotia. His questions were, “Will it beautiful there? Will there be flowers?” I assured him that both were a “Yes.” We did 161 miles from PEI to where we stayed in Dunvegan, Nova Scotia, which included the ferry ride.

We took the ferry from Prince Edward Island in Wood Islands to Caribou, Nova Scotia early in the morning and Zach loved every minute of it; from loading the car onto the ferry, to standing up top on the sides looking over the deck into the strait below. PEI had clouds and fog over it and as we looked south towards Nova Scotia, the same was true for the mainland there. It was sunny and beautiful in the Northumberland Strait, though. We saw a lot of jellyfish on the way over, and Zach spent his time asking me what depth I would swim in, though he knows I would swim in none of it if I can’t see the bottom. 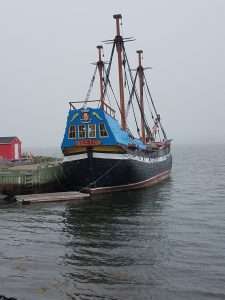 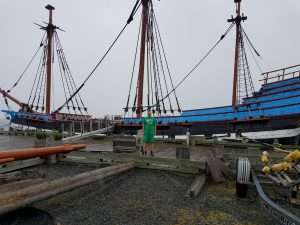 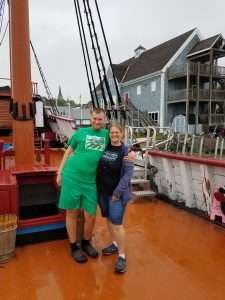 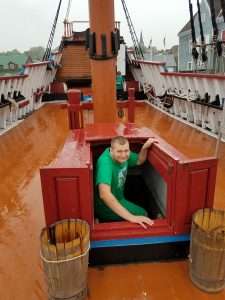 One of the things that Zach really wanted to see again in Nova Scotia was the Ship Hector at the Hector Heritage Quay. He remembers us taking him on this ship when he was little and he wanted to see if it was how he remembered. I couldn’t remember the name of it so I typed in “Wooden ship near ferry dock in Nova Scotia” and it came right up. The ship is located in Pictou, Nova Scotia, and is the site of where the original Hector first came with 179 Scottish settlers back in 1773 to colonize this area. The replica of the Hector is to exact scale and it blows my mind that they were able to fit a total of 179 crew and passengers on such a small ship. As we were coming up to it, Zach remarked that it’s a lot smaller than he remembers, but I had to remind him that he’s a lot bigger than he was at 4 years old, when we were last here.

He had a lot of great questions for the tour guide about life on the ship. I had to laugh when he pointed to the ship’s passenger list and the date of 1773. He said, “Even though times were hard back then, those were the good old days.” He’s on this kick lately in which he categorizes things as too modern or less modern. He really likes things that are less modern.

It was drizzly and wet at the Hector and so far, we’ve outrun a lot of the nasty weather that’s come up and down the coast and I thought our luck had run out, but as we traveled north onto Cape Breton Island, our luck returned. We made it to MacLeod’s Beach and Campsite, which is a spot that holds a place in my heart. We found a beautiful spot right on the edge of the cliff overlooking the beach. Zach remembers the beach and couldn’t wait to get down there. I have a lot of pictures from our trips here in the past and they are some of the most precious pictures I have of my kids when they were little. 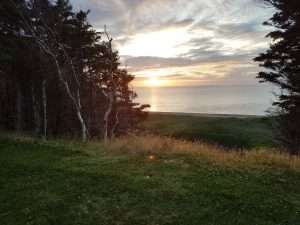 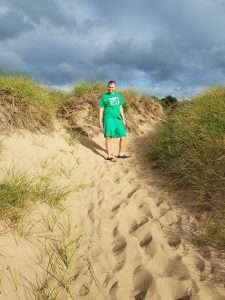 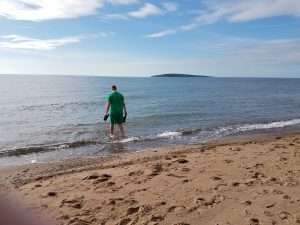 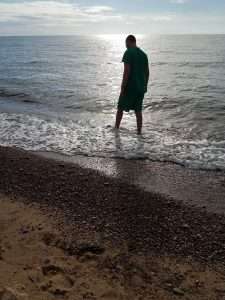 For being up here in Cape Breton, the weather has been unseasonably warm for them. The beach was hot as the sun was starting its descent. Zach wandered off to a small brook that emptied out into the ocean and then walked back across the beach with his feet in the water to cool down. I never get tired of the view of the highlands on Cape Breton. Nova Scotia is so different than Prince Edward Island, but they both have their own unique beauty that I never tire of. Every turn around any corner is just as beautiful as the last.

We had a dinner of steak, potatoes and corn…..steak is so cheap here in Canada! We had a gorgeous sunset to eat by. The evening was a bit rough, though. I forgot was the winds were like on the side of the cliff and our tent got blown in quite a few times and made a lot of noise over the course of the night. It made for a very sleepless night, though the beauty made up for it.