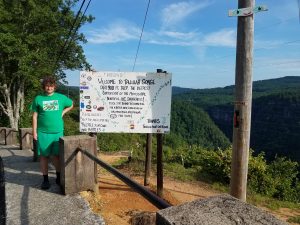 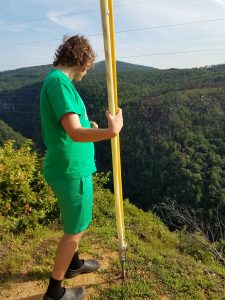 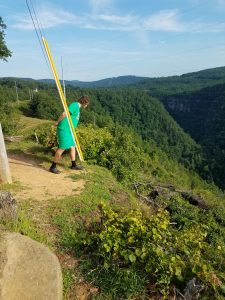 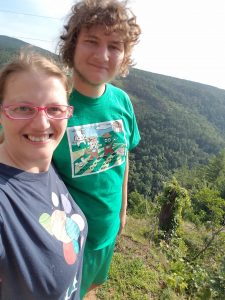 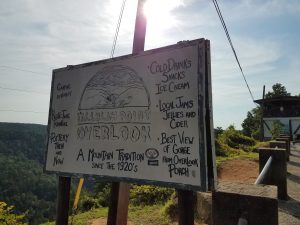 We split up Day 2 between Georgia and Tennessee. Because we got a late start on Day 1, we weren’t able to walk the 3000 steps down into Tallulah Gorge. I have to stay on track with our travels since everything is planned down to the day to make sure that we return home on August 5th, as school starts the next day. Instead, we drove to the lookout point so that we could see down into the gorge, as that was better than nothing. One of these days, we’ll make a special trip back to camp out at the state park and do the gorge steps.

I never think that I have a fear of heights until I’m presented with my kids going to the edge of a cliff. But it appears that Zach also has a healthy fear of heights. He used to have no fear at all and that used to scare the crap out of me when he was younger. Perhaps it’s more caution than fear as he gets older. 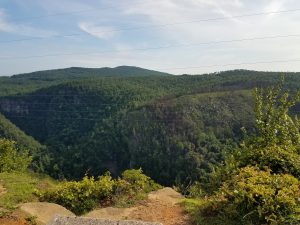 He looked down into the gorge and started giggling and I asked what was so funny. He said he was imagining running and jumping off the edge and seeing how far down he could make it before he landed on an outcropping. Fortunately, he had no plans of that. He said, “I was just using my imagination.” Way to stop your mom’s heart, kid.

From Tullulah Falls, we headed 70 miles west to the Blue Ridge Scenic Railway in Blue Ridge, GA. I did a lot of homework while I was putting this trip together months ago. I wanted to build this trip around Zach’s interests and one of his biggest interests is trains. His other interests are crickets, lightning and thunder. I can’t really do much about those last three as those are left to chance and nature, but trains are something I can do something about. I used the trusty Google machine to look up train rides and built them as much into the trip as I could. The southeast is full of train history as the rails were a huge part of industry and trade. There’s still a lot of train traffic when it comes to hauling goods across the country, but there’s also a lot of tracks that were abandoned when the trucking industry came along or certain industries died out. Those tracks are now in use by scenic railways and the public can get a taste of the gorgeous countryside. 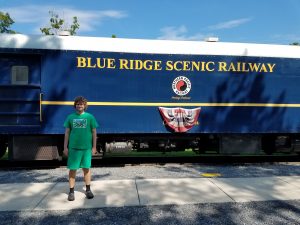 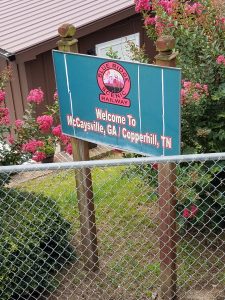 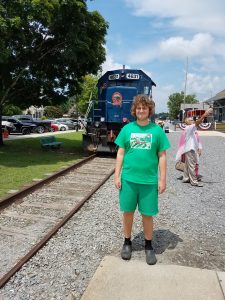 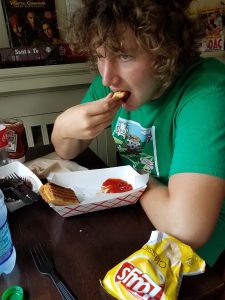 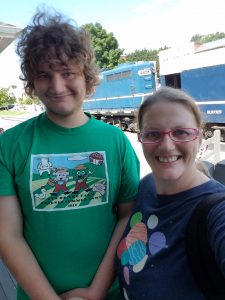 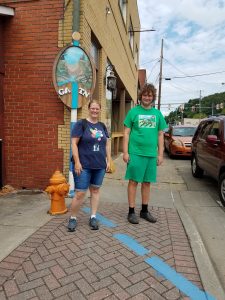 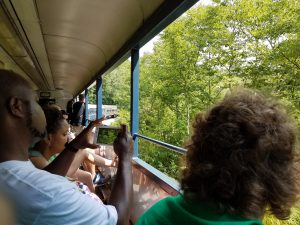 We enjoyed a one hour train ride along the Toccoa River (which is the Trout capital of the world) and saw lots of fly fishermen out in the river. We stopped at the little town of McCaysville, GA and had lunch in a delicious little deli, Katz’s New York Deli, where the peanut butter fudge cupcakes were amazing and Zach got his grill cheese with ketchup….because grilled cheese is LIFE!

While in McCaysville, we walked to the Tennessee border, which is right at the Pearly Gates cafe. It’s such an odd border between the states. It goes diagonally across the town. One part of the parking lot at the IGA is GA and the other in TN. One of the stores in town operates in both states because of where the state line goes. When the train stopped at the drop off point, the front part of the train was in TN, the back half was in GA. 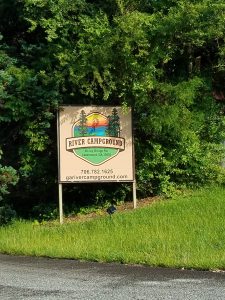 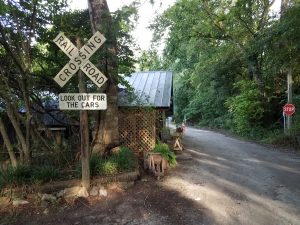 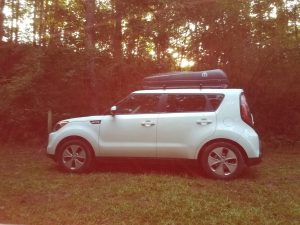 One of the best parts of the day yesterday was just after leaving River Campground near Tallulah Falls. First off, the owners are amazing. It’s a gorgeous little campground with a very rustic feel. We got a primitive site in a little clearing, right near the creek. The owners inherited the business from her father who passed away a few years ago. It sat dormant for a while, but they brought it back to life and it’s incredibly charming. There’s tent sites, RV sites, and covered tent sites. The owners, Tim and Melissa, are some of the kindest and caring folks I’ve met. Tim met us at the entrance when we checked in late to guide us to our site and Melissa checked in with me by phone a bit later to make sure we were settled. When Zach and I went to the bathhouse later to get ready for bed, we met Melissa and her daughter and she was just as charming in person as she was on the phone. We had a great talk about our road trip plans and as we were talking, Zach walked around the front of her van and then came back to us. He said to her, “Hey, I saw that you have a big plastic jar with pretzels in it. That would make a great bug habitat. Can I have it when you’re done with it, please?” I laughed and told him that we were leaving the next morning and he should probably not be looking into other people’s vehicles.

Melissa laughed it off and said that it’s refreshing to meet someone that was so honest and open and that he was so polite about how he asked. We finished our conversation and I got into my car to drive us back to our site and just as I went to back up, she stopped in front of my car. I wondered what she was doing….and then about 30 seconds later, she came to my door, handed us the big plastic jar and said, “I want Zach to have this. And he can have the pretzels, too! He’s right, it would make a great bug jar!” As we drove back, he said, “This is the best bug jar ever! She was so nice!” As much as it’s refreshing to Melissa to meet someone as open and honest as Zach, it’s just as refreshing to us to meet someone so genuine and friendly as Melissa….and as giving to someone she’s just met. If you’re ever going through northern Georgia and need a place to camp that is chill and relaxing, I highly recommend River Campground.

So, back to the thing that made my morning as we left the campground….Zach started planning out the 50th Anniversary Party of Missing the Year 2012. He talks all the time about how 2012 was his best year for his mind and body and how he wishes he could go back to that. I need to make it to 86 years old so I don’t miss this party because it sounds like it’s going to be LEGIT!