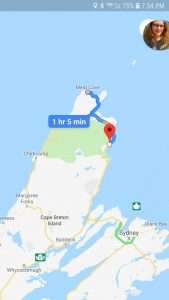 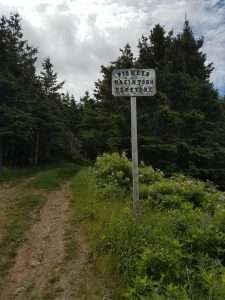 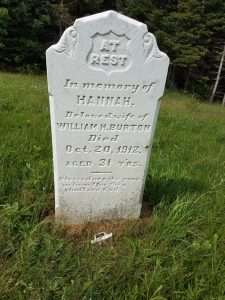 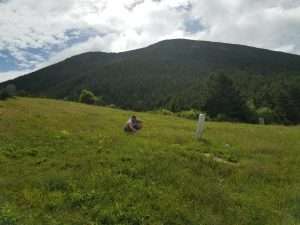 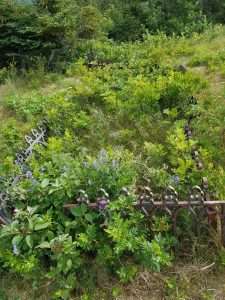 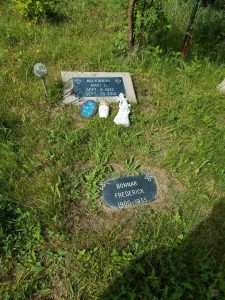 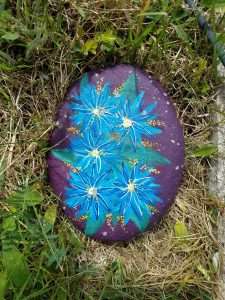 We only went about 40 miles today, but that’s because the largest part of our day was spent in Bay St. Lawrence. One of the things that we wanted to do while in the northern part of Nova Scotia was a whale watch. We had asked which was the best company to go with and were told Oshan Whale Watch. We got to the hut at 10 am to see if we could get 2 spots on the 10:30 cruise but were told it was all booked. The campground host at Meat Cove had warned me to make reservations, but I didn’t take him seriously. He was right….seats went fast. We were able to book spots on the 1:30 pm cruise, but then needed to find something to do to pass the time. Our first stop was the dock because Zach always wants to see how deep the water is. 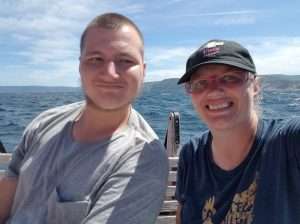 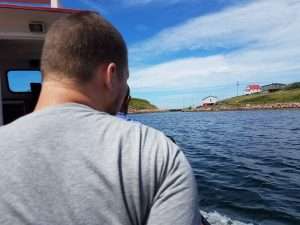 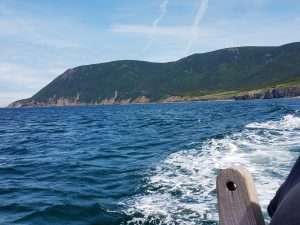 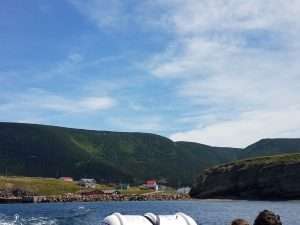 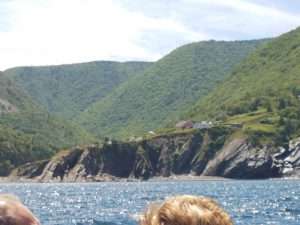 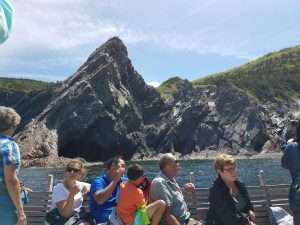 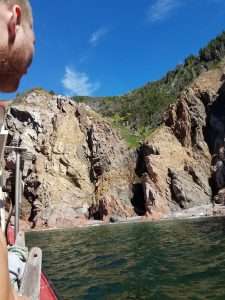 The gentleman booking the cruise mentioned a little Pioneer MacIntosh Cemetery located in the community, as well as a lovely cafe (he said it was the biggest building in town) to have lunch. Zach and I took off on some back roads to see what we could find and I almost missed the sign for the cemetery on my way back into town. I turned around and parked my car and we took the walk up to the little knoll overlooking the bay and looked at all the old stones. Some of the stones that were placed didn’t even have anything inscribed on them. They were simply just large stones to mark the burial plot. My favorite was a low wrought iron fence around a rectangular plot. I didn’t see a head stone, but the wild flowers that grew inside of it were beautiful. Most of the stones were very old, so it was surprising to find one that was was from 2012 with a beautiful painted rock that looks like a recent addition by a loved one. I really love old cemeteries and because of all the churches, there are quite a lot of them around Nova Scotia. My favorites, though, are the ones that are the rare finds in the middle of nowhere like this one.

We hung out at the cafe and had chocolate chip pancakes and sausage and charged up our laptops and phone and tooled around on the internet for a while before heading down for the cruise. The captain of the boat was a humorous gentleman and a 5th generation fishing captain. He leveled with us right before we headed out that the wind was a little strong so there were white caps on the water which makes it hard to see whales. He took us on a nice scenic cruise along the coast line to see the rock formations and all the way to the top of Cape Breton Island. We were able to go past Meat Cove, where we had camped the night before, and see the area from the water, which was a very cool perspective after having been there overnight. We saw some bald eagles (Zach spotted one of them flying and the passengers were all impressed with his good eye!), a seal, some waterfalls and craggy shoreline and then we went out into open water.

We were out for quite a while and I think most of us were resigned that we had just paid for a 2.5 hour scenic tour of the coast line, but the captain’s first mate had taken up residence on the top of the boat house to watch for whales and came down about an hour and a half into the cruise to tell us she saw something. That girl had good eyes…..sure enough, there was a pilot whale out in the water and he came pretty close to us. He showed off a little and then went under the boat and took off. A little while later, we saw him along with another whale and figured they must be traveling together. Another 10 minutes went by with no other spottings and we were all happy to have finally seen at least a couple whales.

The captain started to bring us in a little closer to land and the wind had died down and it was a gorgeous sunny day and a few passengers called out that there was a large pod of whales off to the side. We hit the jackpot. A pod of about 15 to 20 pilot whales (with babies!!!) came towards us and kept us entertained for about 20 minutes. They went under and around the boat and back and forth…..and it was one of the most amazing things I’ve ever seen out in open water. I remember taking the kids on a whale watch back in 2003 when we were last here and we saw a few whales, but it was nothing like the spectacle of watching a whole pod of them traveling together. The captain put his sonar detector into the water so we could also hear them communicating with each other as they swam around us. Absolutely incredible! Zach was so excited to have such a successful day at sea! I get motion sick pretty quick, so the whole 2.5 hours at sea was a struggle for me and I had to find my “happy place” quite a few times so that I didn’t lose my lunch, but the smile that was on Zach’s face the entire cruise and for hours after it made it all worth it.