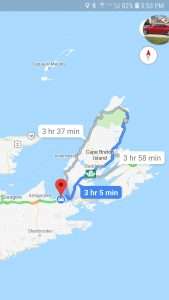 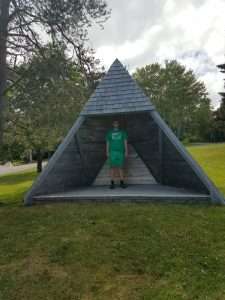 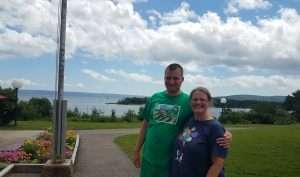 We did 150 miles today down the eastern side of the Cabot Trail and then along the western side of Bras D’or Lake, which is an inland sea of a mix of salt and fresh water that resides in the middle of Cape Breton Island. We wanted to go to the Alexander Graham Bell Museum in Baddeck. Zach is into old timey things lately and says that life is too modern for him, so I thought he would appreciate seeing early prototypes of the telephone, replicas of the Silver Dart (the first powered flight in Canada) and other inventions that Bell created.

I would have loved to take a picture of Zach flying a kite with Bras D’or Lake in the background, but unfortunately, the wind wouldn’t cooperate. We’ve had so much wind while on Cape Breton while we’ve been sleeping or trying to set up the tent, but the one moment when we wanted it to fly a kite, there was none to speak of. Zach tried a few times, but quickly gave up. 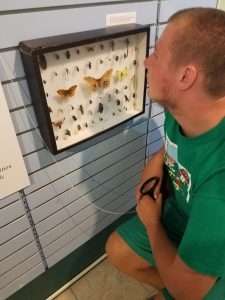 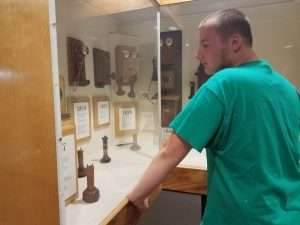 After we had a nice little lunch at the picnic grounds above the museum, we headed inside to see old timey things. Out of all the things that were in the museum, Zach spent the most time looking at a frame with pinned insects that were native to the Bras D’or Lake area. He was especially intrigued  by the dates of the bugs. Some of them were a lot older than the others. We also looked at the old prototypes and models of phones, Graham’s inventions, photos, etc.

We made the drive off of Cape Breton Island and onto the mainland and to Linwood Harbor Campground for the night. While we made our drive, we stopped at a little art gallery that is housed in what used to be a Presbyterian church. I looked at the amazing art inside that I could never be able to afford (including some beautiful painted feathers) while Zach asked all sorts of questions about the architecture of the church and the stained glass windows. The owners of the gallery are also chocolate makers and that was definitely in my budget so we got some amazing little balls of goodness that were a concoction of crushed pretzels with peanut butter rolled into a bowl and dipped in chocolate. Zach and I loved them and I’m going to try to figure out how to make them when I get home. 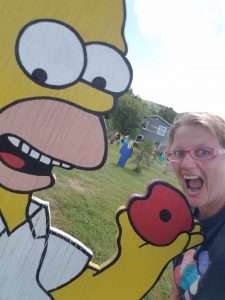 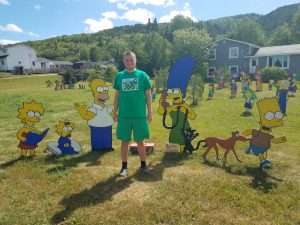 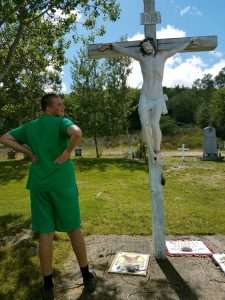 As we made our way to the campground, we passed a yard that was full of life size figures of characters from “The Simpsons” cartoon. We turned around to go get pictures. There were also Paw Patrol, Inspector Gadget and Teenage Mutant Ninja Turtle characters, but the overwhelming theme of the yard was the Simpson family. There was a little donation box that encouraged people to leave donations if they took pictures so we left a couple bucks for the photo op. A short ways up the street, we had to stop again at a cemetery because Zach saw a Jesus figure on a cross. This was the second one we stopped at on our trip. He wanted his picture taken with Jesus so I let him.

We pretty much took it easy the rest of the night at the campground since it had been a lot of driving and site seeing. It was another beautiful night, though Zach did wake up in the middle of the night to let me know that there was a skunk just a few feet from our tent and it was digging through the trash bag I had forgotten on the bench. I usually either throw the trash out or I put it in the car overnight, but it slipped my mind. We didn’t make a sound since we didn’t want it to spray anywhere near or on the tent, but I had quite the mess to clean up in the morning.