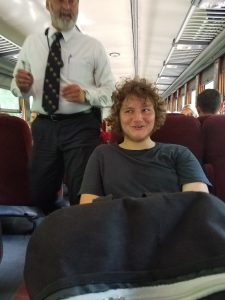 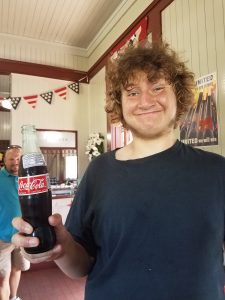 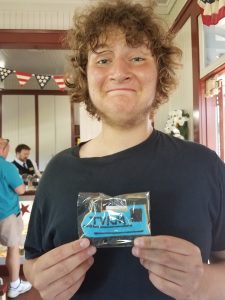 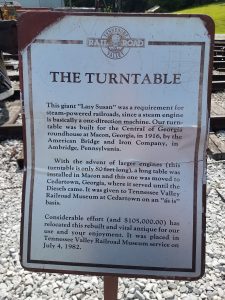 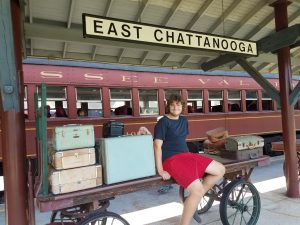 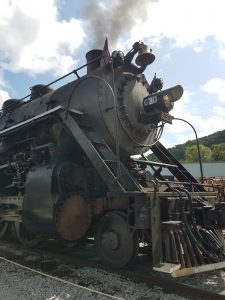 For our second day in Chattanooga, I got us tickets to ride the Missionary Ridge Local, which is part of the Tennessee Valley Railroad Museum (they consider their trains the museum, rather than having a building full of artifacts). For $17 per adult, we got to ride on a train pulled by a 1904 coal fired engine. Yes, there was a guy in the front of the train shoveling coal into the furnace! We road for 20 min over bridges and through a pre-Civil War tunnel through Missionary Ridge (it was completed in 1858). We stopped for about 25 min. at the East Chattanooga station while we watched them detach the engine from the train and put it on the turn table to do a 360 degree turn to reconnect it so that it could push the engine back. There was a little depot at the station where we could get drinks and snacks, so Zach got a Mexican Coke and a cookie in the shape of a train. The depot had a very vintage feel to it. After the train was reconnected, we did the 20 minute ride back to the museum station. All around, it was a 55 minute trip and 6 miles.

When we got back to the station, Zach wanted to hang around for a little bit because we had seen a freight train go by earlier and he was hoping that another one would come through. He was in luck because after waiting for about 15 minutes, a long freight engine train came in with just the right amount of engines and cars. He’s very specific about his preferences. If you ever talked to Zach about trains, you know that it has to have at least 2 engines pulling 17 or more cars with a variety of freight.

We wanted to do the Incline Railway up Lookout Mountain again, but when we got to the station, we were told there was an hour wait just to go up, and then an hour wait just to come back down. Zach had had enough of lines so we decided to just go back to the campground and hang out at the pool for a while and take it easy the rest of the night. 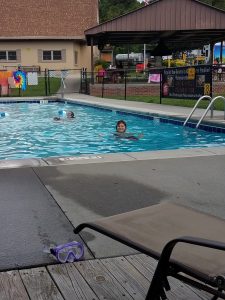 I had the adventure of losing my keys for a good long search as I panicked and sweated (because of both panic and the heat and humidity) looking for them, knowing that I had a second set of keys, but the ones I lost had the key to the car carrier, which is carrying all of our extra clothes and necessities for the long term.

We had long discussions about different kinds of insects and the noises we were hearing at the campsite, hot dogs were eaten, as well as chocolate pudding crumbled Oreos in them. Zach has declared it a new delicacy and I’m the best mom ever because I let him have two pudding cups.

The morning before, I had made breakfast on the camp stove and Zach had a bag of mini powdered donuts that he had been itching to eat, so I told him he could have some before I made eggs and sausage. I also asked him to fill up a pot of water at the water pump so that I could heat it up to do dishes. He was gone for about 15 minutes and it wasn’t that far away so I was starting to get worried and about to find out where he’d gotten to….when he came around the corner with just the pot of water. I asked where the donuts were and what took him so long. He informed me that he didn’t want to spill the water on the way back and if he had to carry the donuts back, too, he would surely spill the water. He also didn’t want to leave the donuts there because someone might steal them. and he’d have to go back for them, which meant more walking and what if they weren’t there when he got back? That would be disastrous. So, he made an executive decision and sat down on the bench near the pump and ate all the donuts in the bag, then threw the empty bag out, filled up the pot with water and walked back. It took time to eat all the donuts, which is why he was gone for so long. He told me, “It only made sense, Mom.”