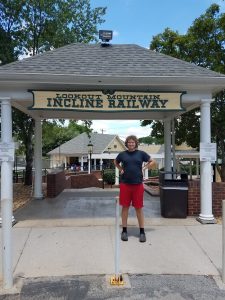 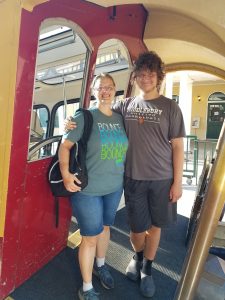 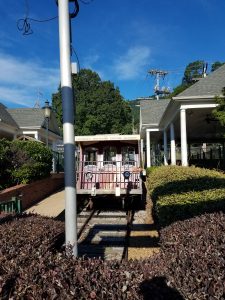 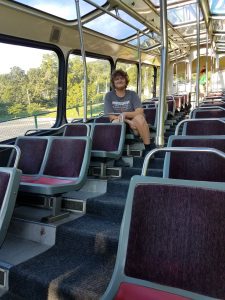 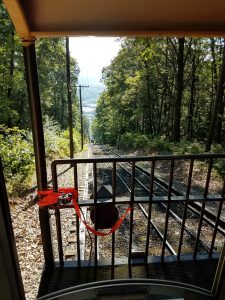 For our last outing in Chattanooga, we got up early and packed up camp. We were bound and determined to go up the Incline Railway up Lookout Mountain before we left. The lines were so long the day before and Zach was tired of waiting for attractions so we asked what time they opened…..so we showed up at 8:25 am, 5 min before the ticket office opened. We were first in line and paid for our tickets, but they the printer didn’t work so we stood waiting for 15 min. until they could finally be printed out. Unfortunately for the people behind us, it stopped working again. We ended up getting the first rail car up the mountain all to ourselves because they had to start keeping the car on schedule regardless of the printer not working, so they could only let ticketed people on and that was just us!

When we got off at the top, we were told that they weren’t sure when the next rail car down would be because they had to wait for the one at the bottom to come up and with the printer not working, they couldn’t send another car up. That was just fine with us for a while since we wanted to check out the view and the gift shop. It’s said that you can see 7 states from the top of Lookout Mountain, but we didn’t find any plaques that showed where they were, so we’ll just have to take their word for it. 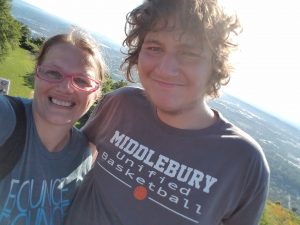 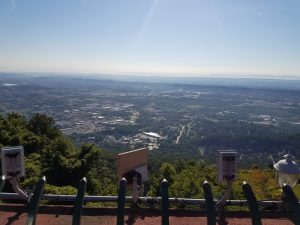 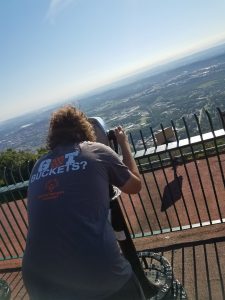 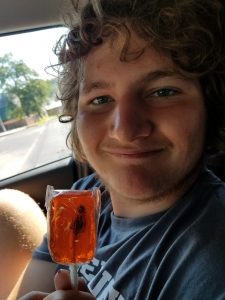 It was an amazingly gorgeous day for the ride and the view at the top. Zach was able to spot a Norfolk Southern train snaking through the valley. Even from on top of the mountain, we could feel the rumble of the train from down below and hear the wheels on the tracks. I had to run a few flights down to get quarters from the gift shop so that Zach could spot the train through the binoculars, but it was well worth being out of breath for.

We found amazing chocolate and peanut butter fudge at the gift shop, and Zach also found a lollipop with a cricket inside of it that he insisted he needed to try. Just last week, he bought sour cream and onion flavored crickets and ate them right up and said they were yummy. He put this lollipop down quite quickly and when he got to the cricket, he started chewing both the cricket and the lollipop. We also made quick work of half of the fudge and put the rest aside to hopefully last a few more days. 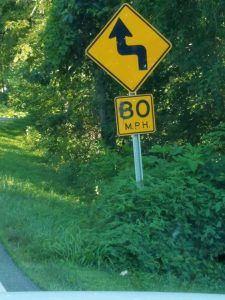 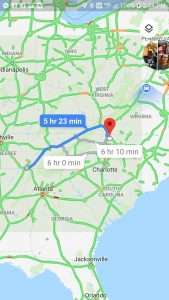 We traveled up through Knoxville and stopped in with a dear friend to have lunch and then headed off towards North Carolina to spend the night with another dear friend that I met over 19 years ago, when I was pregnant with Zach. Another 347 miles down. I pushed my car to about the limit…we pulled into a gas station pretty much on fumes about 5 miles from our friend’s house. I also had to go back down a hill so that Zach could get a picture of this sign. He thought it was absolutely hilarious that people might just think they had to go 80 mph up a windy road and was using his imagination and giggling about it.

After 4 nights in a tent, it felt good to sleep on a bed, have a home cooked meal off the grill, and we were able to do our laundry. Fresh sheets for the air mattress and clean towels!