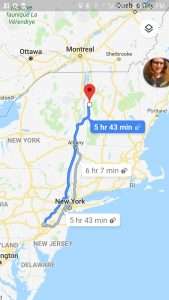 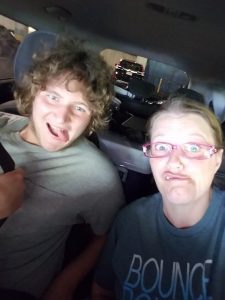 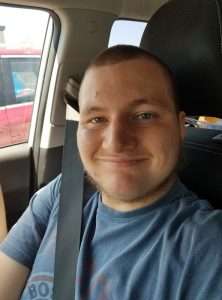 We left Philly early in the morning for the 6 hour drive to Vermont. Another 332 miles. We needed to make it in time for Zach to get to his dad’s workplace at quitting time so that he could spend the next two nights with him. During the time Zach was with his dad, they didn’t take any pictures, so you’ll have to see my pictures from the weekend. Zach was able to catch fireflies with his dad, go out to eat, go to the field across the street from the house he grew up in before we moved to Georgia last year and go out to see the new Jurassic Park movie.

Before we left Georgia, Zach wanted me to cut his hair because that big mop of curls was getting hot on his head and a bit unruly to take care of. His clippers had broken, so I told him to ask his dad to cut it. I was shocked at how much older he looked when I got him back on Sunday. I’ll miss those curls, but his head feels much cooler and they’ll always grow back. He kept the beard that’s growing in as he said he’ll only shave that on an as needed basis. 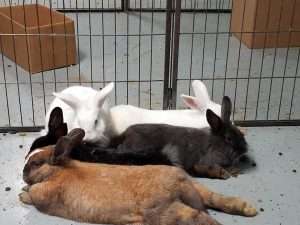 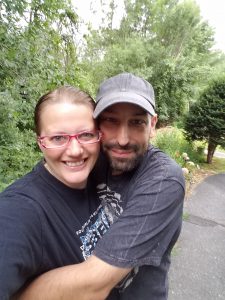 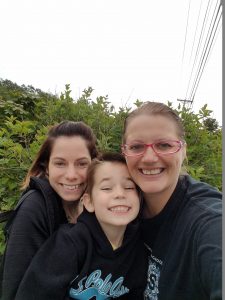 When I got into town, I was able to spend time visiting with my brother and sister in law and petting and snuggling the bunnies at the Fluffy Bunny Rabbit Sanctuary that they run from their home. They also have a bakery and hooked me up with goodies for our trip. I spent the night with one of my best friends, Matt, and we went out for all you can eat fish and chips dinner. It was so great to spend time with him and chat the night away. The next morning, I was able to meet up with my friend, Stephanie, and her adorable son for breakfast. Lunch was spent with another dear friend, Karen. It’s so hard to go back to someplace you’ve called home for over 20 years when you only have a short amount of time and have so many friends you want to see. 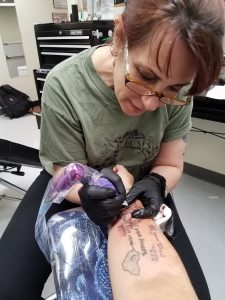 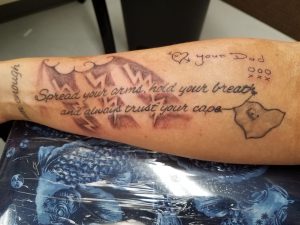 While I was in Middlebury, I had planned to get some tattoo work done by my favorite artist, Christin, of Frog Alley Tattoo and Leatherworks. Before I moved to Georgia last year, she did some work on my forearms. One of them is of lyrics from Guy Clark’s song, “The Cape.” I had Christin add some clouds and lightning bolts around it. While I love what she did around the quote, what most made me happy was putting my dad’s handwriting on me. Most of you know that my dad passed away last January. Right before Zach and I left for our trip, I found a little book that my dad had given to me 21 years ago, back in 1997. Christin was able to take pieces of his writing on two different pages and piece it together as a bit of a “love note” from him. This is probably the ink work that I’ll treasure the most. 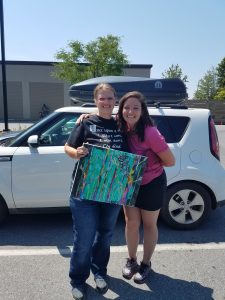 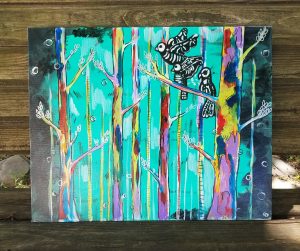 I spent the night at my friend, Taylor’s, house on Saturday night and stayed up late laughing and having a great time. Sunday morning, he made me brunch and then I picked up Zach. We met up with my friend, Deanna, and this was a meeting I was so looking forward to even though it was very short. Deanna is an amazing artist and I love her colorful and unique style. I commissioned a piece of art from her and told her I wanted trippy, rainbow trees with three little birds (Bob Marley reference) but I wanted the birds to be skeleton birds. I didn’t want any sneak peeks during the process…I wanted to be surprised. It turned out even better than I had imagined in my mind and I can’t wait to get it home to hang it up! I love when I’m able to get pieces of art from friends that have styles I love. 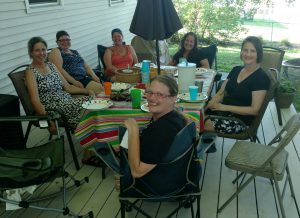 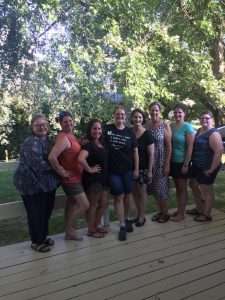 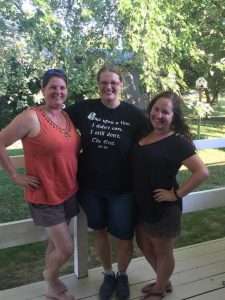 Zach and I then headed over to my friend, Patty’s, house where we stayed the night. Patty and her daughter, Kimberly, put out an amazing spread of food and invited over a bunch of our coworkers from the high school that I worked before moving to Georgia. It was truly the best job I’ve ever had and I miss this group of ladies so much. We were able to spend a few hours catching up with each other in the beautiful afternoon summer breeze of Vermont on the back of Patty’s deck. Patty’s husband, Sean, surprised Zach with the largest box of his favorite cereal he’d ever seen! And Zach kept himself busy at times with doing train horn sounds on the keyboard. It’s amazing to me that he can pick out the 3 to 5 notes of each train horn on different trains. I’d never known that there was more than one note until Zach filled me in a few months ago. 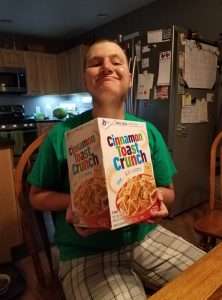 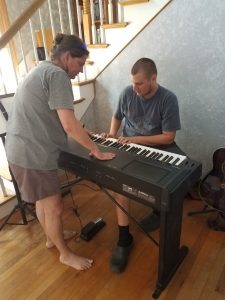 I got caught up on my homework and submitted my assignments on time for the week, did a load of laundry in Patty’s machines, and she also helped me reorganize my car and car carrier. Our time in Vermont is the last stop for the next 15 days where we’ll see any friends or family. From here on out until August 1st, it’s just Zach and I and the tent.