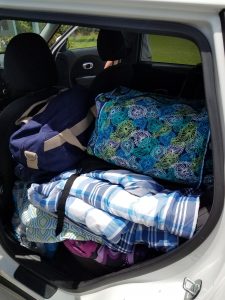 A friend asked me how I planned for packing and to be honest, packing for 31 days on the road seemed a little daunting at first, but I literally only packed everything the night before. I had it planned in my head as to what I needed, but I didn’t want to overwhelm myself so the day before, I went through my mental list and just started packing. My boyfriend installed a roof rack on my car so that we could put the car carrier on top for long term storage of extra clothes, some food stuffs, and essentials. Everything else got put in the back seat and “trunk” of my Kia Soul. These little cars are like a clown car. It’s amazing what you can fit inside, but that car carrier was the best thing I ever did to this little work horse! I fit our clothes into two bags each and then made a “3 day bag” of clothes that we could take into our tent or a house (when we stay with friends) rather than lugging everything we own with us (my mom’s genius idea from her own road trip that she’s currently on). Toiletries got put into one bag, and our valuables got put into a backpack. 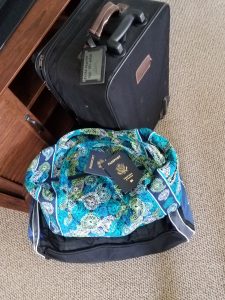 All of our camping gear and camp stove that we need every night got put into the “trunk” of the car so that I can easily store it and have easy access to set up when we make camp. The cooler is in the middle of the back seat so it’s convenient to reach into when we want something to eat while on the road. We put two cases of water on the floor of the back seat, as well as a couple bags of snacks. The rest of our blankets, pillows, overnight bag, etc. got put on the seats around the cooler. It’s a tight fit, but there’s still room for me to be able to see out the back window and the side windows so nothing is obstructing my view while driving.

We’re day 2 into our trip and it seems to be working well.

This trip started months ago in our minds. Zach and I talked about taking a road trip to Vermont and so we planned to put a couple weeks aside to travel up the east coast and take in some sights and adventures that we had never done before. But then, Zach said he wanted to go to Nova Scotia again, like his father and I had done with he and his sister (Elise) when they were little. I have been wanting to get back to Nova Scotia and Prince Edward Island for years, so I told Zach that if we were to add those, we’d need to add another two weeks to the trip. So, a 2 week trip became a one month trip. 31 days, from Georgia to Prince Edward Island, Canada and back.

The thought of 31 days on the road was a little much for Zach to take in at first, but the more I told him about all the awesome things I had planned for him that centered around his interests, the more he got on board with the idea. It took me two full days to put together our itinerary….about 10 hours total of mapping. My Google Drive is my best friend and our Road Trip File has 12 folders in it, day by day, state by state, mapping out each state and province that we are stopping in, what we are doing when we get there, where we’re staying, approximate costs, etc. To say that I’m organized is an understatement, but I had a goal. Our goal was to see the fireworks over the Savannah River for our first 4th of July in Georgia, and to make it back the day before school starts. So, that put us leaving on July 5th and returning August 5th. I had to be precise in every single plan. We are now one day in and we we left about 5 hours later than planned (you know how that goes), so we missed out on our first sight seeing of the trip, but that’s just one of the breaks of trying to stay on track. I’m the only driver…it’s just me and Zach….so onward we go. 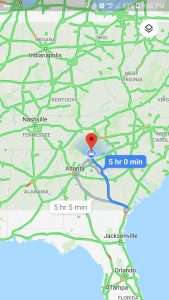 We started out from the Savannah area around 2 pm yesterday and drove northwest through Georgia to Tullulah Falls. It was a beautiful drive and mostly off the highway through rolling farmland. It took us about 5 hours to do 2

81 miles, but this part of Georgia is gorgeous. My car kind of forgot what it was like to go uphill since we’ve been living in the low country on the coast for the past 10.5 months. I started wondering what was wrong with my car and why we were going so slow in 6th gear when I realized that we were going uphill and I needed to shift down to pick up some more speed. My car and I forgot what it’s like to drive in elevation. When we got to the Blue Ridge Mountains in Tullulah Falls, GA, I was so excited to see mountains rise off in the distance. I don’t miss the cold of Vermont, but I do miss the mountains. When I told Zach to look up and see them, he let out a “Whoa!”

We stayed at River Campground last night and chose a primitive tent site. We are the only ones in this little clearing and it took Zach a few times around the clearing to pick out the perfect spot for the tent. He wanted to make sure it wasn’t muddy, but clean. He was a great help in getting the tent set up and then took off to take a shower because it’s still humid here in the summer, even up in the foothills. While he was off showering, I attempted to get our new camp stove set up to make ravioli for dinner. We’ve never used a camp stove before. In all the years that we’ve gone camping (and we’ve done a lot), 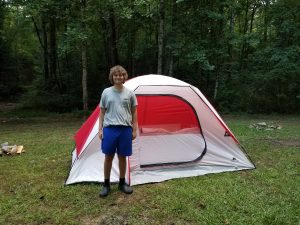 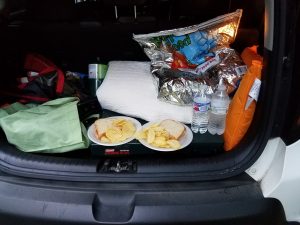 we’ve always cooked over an open fire. I went with the camp stove this time around because I wanted to make it easy and quick. Of all the things that I forgot to pack, I forgot the butane torch to light the stove with, so we ended up eating peanut butter and jelly sandwiches with chips for dinner. A trip to Walmart is in our future today.

Last night’s sleeping adventure came with a bit of feeling nauseous as Zach got up and down, up and down, to fix the “pressure” in his head and every time he got up and down off the air mattress, it felt like I was on a sailboat, rolling in rough seas. We got a couple light thunder storms through the night that Zach was excited about and kept waking me up, and as usual, he’s now sound asleep while I’m wide awake.

The plan today is a train ride…..so now it’s time to wake the sleeping bear.